This toy racing car craft is made from a Pringles can! I wanted to make a toy car from a shoebox with wheels that actually turned. I asked my husband for some advice and he had the great idea of using a Pringles can! The fact that I had to buy him some Pringles I’m sure had nothing to do with his suggestion. In the end, he made the whole thing himself, so this is actually a guest blog post from him, sharing how we made a Pringles can racing car! Here’s what he has to say:
I like Pringles, and I like motor racing, so when Georgina asked me to help with an idea for her blog, what could be more natural than a Pringles racing car!
I started with an empty Pringles tube, some wooden wheels that Georgina gave me, and two wooden dowels that I had in stock. My initial idea was to use the four wooden wheels: two at the front and two at the back, but it didn’t look… racy enough. So I decided to make some larger wheels for the back and double up at the front.
Marking out on a tube was awkward, so I used the printed nutrition information label as a guideline. 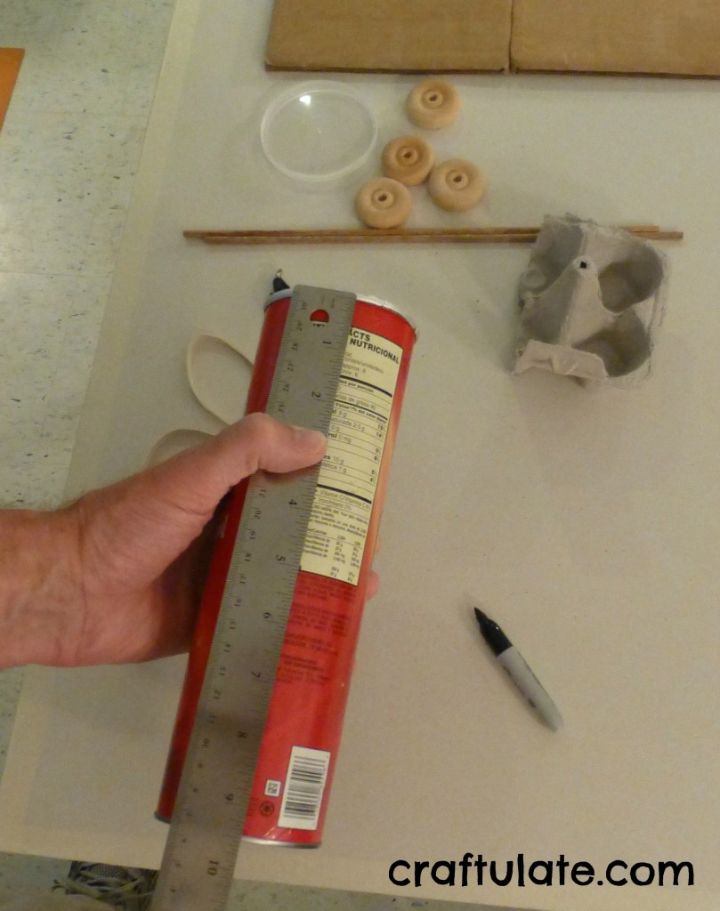 First, I marked a centerline on what would be the bottom of the car with a ruler and sharpie (marker pen), then marked each side of the line for holes for the front wheels. The tube needs to be clear of the ground when resting on the wheels – it looked to me like the edge of the nutrition label would be about right; and put the wheels about one wheel-width back from the front of the tube. To make the holes I used a twist drill (that was a little smaller than the width of the dowels) to make a push fit. Then I poked one of the dowels through the two holes to make an axle; and put a pair of wheels on each side.

While I was wondering how to keep the wheels from falling off the axle, I decided on craft sticks. I drilled holes in both ends of four sticks, by stacking them carefully one on top of the other. If you have an electric drill it’s easier, but you can do it by hand with a twist drill and a bit of elbow grease. 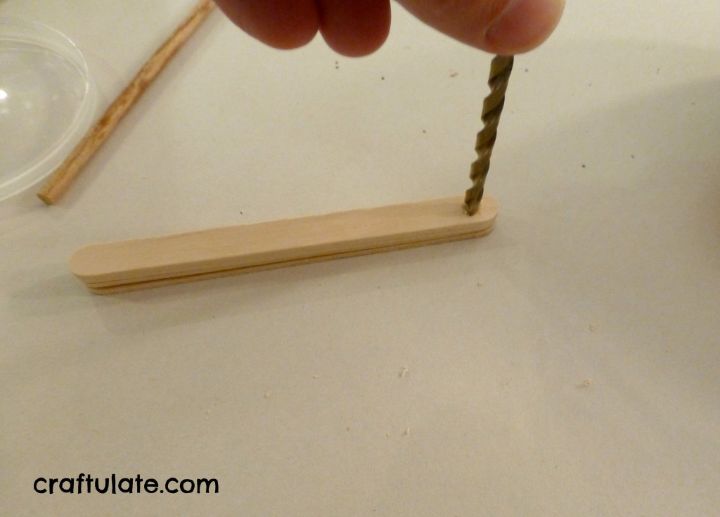 Here’s the arrangement: the axle pokes through the tube, and on each side there is a craft stick, two wheels and another craft stick.  Nothing is glued at this point. The axle stays still and the wheels turn in this model.  I made sure that the wheels have plenty of freedom to rotate smoothly, then put a drop of glue just on the outermost craft stick on each side – not on the wheel itself.  Note that the outermost sticks are both resting on the table, so I know the holes at the front are lined up with each other. Next I carefully snipped off the excess dowel.
Note: I used a hot glue gun for this project. Wood glue or white craft glue would work OK too.  Make sure it’s non-toxic if you plan to let your child play with the finished article!
For the back wheels, I didn’t have anything suitable in stock so I traced round the Pringles lid onto some cardboard and carefully cut out two wheels with a craft knife. The rounder they are the better, but they don’t have to be perfect.  Don’t try to cut all the way through in one go, you can go round the circle several times cutting deeper each time. 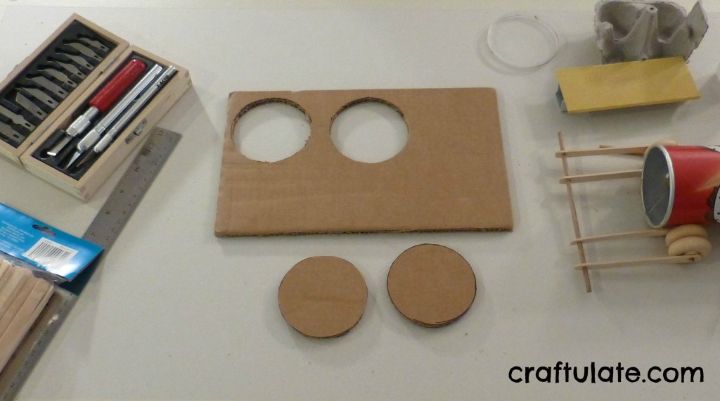 You may notice in the last picture that I also pushed another dowel through the front of the craft sticks, to complete the support for my front wing.

Find the center of each back wheel, e.g. by drawing two diameters across it roughly at right angles to each other, or by eyeballing it.  Then drill through with a twist drill or just poke a hole with a stick. I used two wide rubber bands for the tyres. Again, you need to measure so that the tube will be clear of the ground with the wheels on.  I jacked up the back of the car with a few craft sticks, and rested the wheels alongside then marked through with a pencil. Then I made holes in the tube, and poked a dowel through to hold the wheels on.  Again, I used four craft sticks with holes drilled in each end to help retain the wheels and to be the basis of the rear wing. I cut off the excess dowel and put a spot of glue just to the outermost craft stick, again make sure you don’t glue the wheel to the axle. Then I added an extra piece of dowel through the remaining four holes to be the wing. 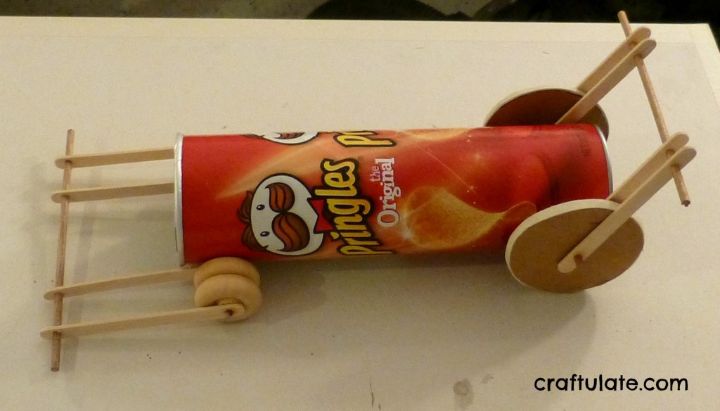 I realised that the wing wouldn’t stay up on its own, so I cut a small slot in the rear top of the tube to take one more piece of craft stick. This one has a hole just in the top end.  I had to refit the dowel.  Then I glued the dowels for the front and back wings. So far so good.  Now I was ready to make a cockpit for our intrepid driver.  I cut a piece from an egg carton, laid it on top of the tube near the rear and marked round with a sharpie. 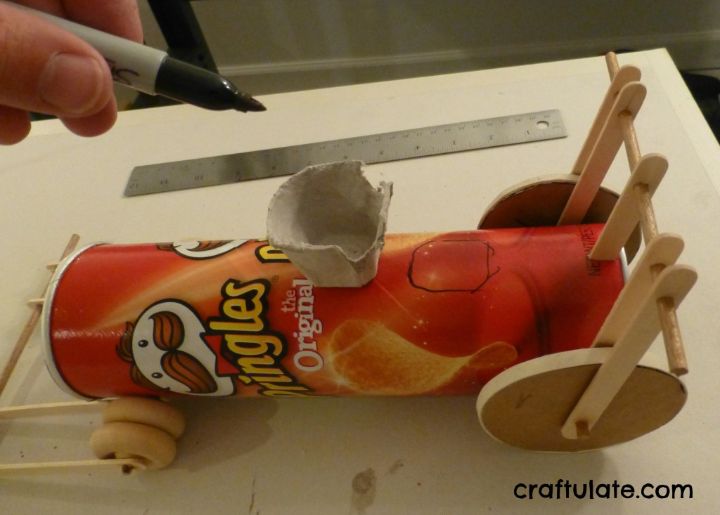 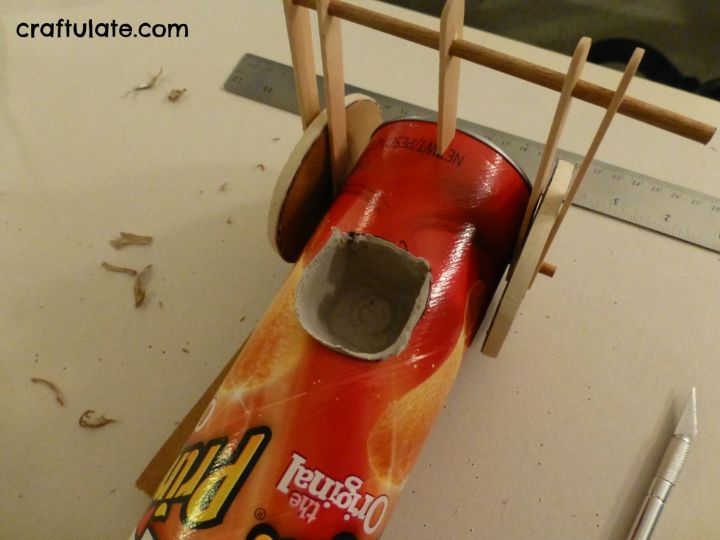 It remained only to cut out a cardboard piece for the front wing and slot it carefully with the craft knife to fit round the craft sticks. With the craft sticks resting on the ground, the wing should be just clear, so that the car can roll freely. Then I glued the wing to the dowel.
Finally I cut out, slotted and glued the rear wing, this time giving it a jaunty angle to produce some down-force in the corners! I replaced the lid of the Pringles tube, drawing on a radiator grill with my faithful sharpie. Voila! One race car, apparently from the Pringles racing team! Georgina and I showed it to our son who loved it! We have to supervise him when he plays with it but generally he’s quite careful.